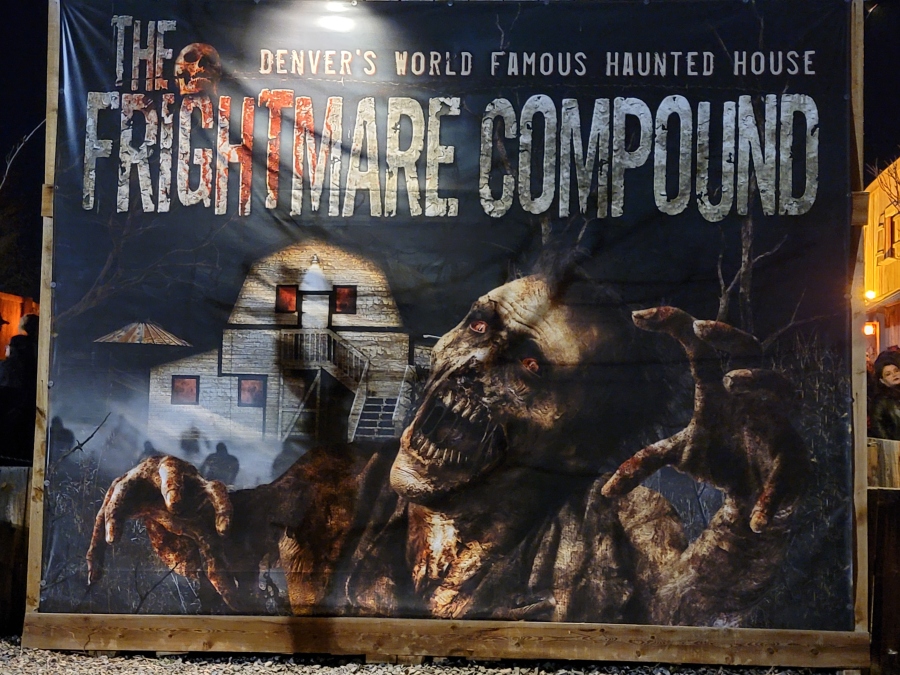 Denver’s oldest haunted house, The Frightmare Compound, in Westminster, CO turned it up this year and went from haunted attraction to full blown haunted event! We’re talking, mini escape games, a coffin ride, live DJ spinning club style tunes, ghouls dancing on tables… they even have a connection with a local brewery that’s a 2 min walk from the haunt for adult beverages and bar games. It’s a total party atmosphere! Somebody went to Transworld or some other haunters convention during the off season and got some ideas because this place was jumpin! This haunt has been around for almost 40 years and they have managed to keep up with haunt trends and upgrade and advance every year while still keeping to their roots as far as storyline, theme, and scares.

The facade of the haunt where the queue lines wrap around is phenomenal looking! It really does look like you are entering an abandoned mining town. There is so much detail on every wall. Broken windows, gas masks, lanterns, pick axes… everything you would imagine a mining town would have in the 1800’s can be found here. There are even posters on the queue line walls that tell the story of the farmland that Frightmare sits on. How it was secretly a government facility used to experiment on people and that’s why there are some strange inhuman creatures still roaming the grounds. There was even a plane crash on the site and the plane is still on the grounds and is part of the haunt! The set and props here are just top notch! Once again we have a haunt that really utilizes the natural landscape as part of their set design and it works so well. The native grasses and trees that have grown up over the plane crash site, the farm equipment that was left to rust…it all just works! There were not a ton of actors when we went and we felt there were quite a few dead spots that could have used an actor or even an animatronic to liven things up and add more scares. We really enjoyed the changes they made to the actual farm house portion. The layout was changed up a lot! They added some tight narrow hallways and staircases, and kept some of the best features of the farm house intact (like the fridge walk through). And at the end, the Ghostbusters car was parked behind the house! What a cool surprise for us!

The best and most notable change however was their decision to scrap the old clown haunt, and add a Frightmare Museum! This was absolutely genius and one of the best moves they could have made! The museum was full of old props, pictures and memorabilia dating back to the beginning days of the haunt. Photographs and video are encouraged and the museum curator absolutely loves his job and enjoys when you put him on camera. 😉 This was just a fantastic re-imagining of this space and it was one of our favorite parts of the whole experience. The Frightmare Compound has been steadily evolving over the years and it has been a blast watching it grow into the incredible haunt event it is now. Put this one on your haunt bucket list folks, it is worth it!

Ticketing info and Halloween weekend hours can be found at the link below.

Josh Holder hits a home run!! @thefrightmarecompound and #hauntedmansiononcolfax
Thank you @skiingfiddler for a super fun night at Haunted Stage Stop. It was worth the trek! What a fun old school style haunt. The building is old and creaky and rumored to be haunted creating the perfect atmosphere for some scares! The actors are fantastic at hitting their scare marks. And the whole concept of the haunt just screams vintage. It was spectacularly spooky!

Next up for Review

Josh Holder hits a home run!! @thefrightmarecompound and #hauntedmansiononcolfax
Thank you @skiingfiddler for a super fun night at Haunted Stage Stop. It was worth the trek! What a fun old school style haunt. The building is old and creaky and rumored to be haunted creating the perfect atmosphere for some scares! The actors are fantastic at hitting their scare marks. And the whole concept of the haunt just screams vintage. It was spectacularly spooky!